The Grigori or Fallen Angels are the primary antagonists of El Shaddai: Ascension of the Metatron. The premise of the game features seven fallen angels who abandoned Heaven after stealing the Fruits of Wisdom. It is these angels, the Grigori or Watchers, whom God charges Enoch to find and return to Heaven. These angels are also the parents of the Nephilim.

In contrast to other angels, the Fallen Angels bear futuristic, black armor and have no wings (judging from the introduction, however, it appears they did once bear wings). This armor was likely provided by the Darkness, as Enoch bears nearly identical armor when he is subjected to the Vileness. The armor is completed by a triangular helmet bearing a single Cyclopean eye in the corresponding color associated with that particular Watcher.

Beneath the armor, the Watchers resemble ordinary human beings of varying adult age, wearing body suits of varying colors. A devil-like tail protrudes from their upper shoulders. Their appearance is heralded by a dark, smoky aura.

Due to their pact with Belial, the Grigori can take on monstrous Nether forms to help destroy their enemies.

It is revealed in the game's introduction that the Grigori, following Semyaza, had betrayed God and took shards of Wisdom from Heaven. Motivated by their curiosity about humans, they fled to Earth and shared this wisdom with human beings, although a few of them (Semyaza, Arakiel and Armaros) were critically damaged in some way by the descent. Their coming to Earth and the sharing of God's Wisdom without permission had a negative affect on the evolution of mankind; people did become more advanced years before their time, but this corrupted many people and they fell to worshiping the fallen angels instead of God. The only people not to be fooled by the Grigori were the Freemen, who remained loyal to God and to their fallen prophetess Ishtar.

To conceal themselves and their new acolytes from God, the Watchers constructed a tower and outer city within a pocket dimension, creating a false sky. As a further aid, the Fallen Angels made a pact with a "prince of Darkness, who hungered for human souls", and gained diabolical power.

To make matters worse, the Fallen Angels began mating with humans. The resulting offspring were the Nephilim. Although adorable in appearance, these creatures were irreversibly damned by their parentage and sought their own destruction to end their pain. Unfortunately, their method of doing so was the consumption of one another, with catastrophic consequences. Eating one another caused the combined Nephilim to devolve into Fire Nephilim, extreme dangerous creatures who destroyed and consumed anything they could, killing many people (the Nephilim of Armaros alone remained peaceful).

Seeing this horrific potential, the Heavenly Council decided that the world needed to be purified of this evil by means of a second Great Flood. However, God offered an alternate method: He commissioned Enoch, a human whom God favored, to find and capture the seven fallen angels with aid from Lucifel and the Archangels. This will not only stop the designs of the Watchers and their followers, but will also obliterate the suffering Nephilim before they devolve into more dangerous creatures. Enoch accepts this mission.

Semyaza - A powerful angel who betrayed Heaven by stealing God's Wisdom and giving it to humankind. According to Lucifel, Semyaza was a member of the Heavenly Council of Elders. He is one of two fallen angel not to be fought by Enoch at all; like Arakiel, it is revealed that Semyaza has been dead for some time, his body having been reduced to dust inside his life-support system.

Azazel - Semyaza's second-in-command, and a former angel who introduced advanced technological innovations to humans, out of fascination for the evolutionary potential in people. According to Lucifel, Azazel is the leader of the Grigori. Although defeated by Enoch, before Azazel can be purified, he attempts to continue fighting but is destroyed by Dark Armaros. The eye color of his helmet is green.

Sariel - A former angel who wanted to understand the love between human beings, and took many human lovers, having confused "Love" for "Lust" producing numerous amounts of Nephilim. He is the first of the Grigori to be purified and imprisoned by Enoch. The eye color of his helmet is magenta.

Ezekiel - A former angel who wanted to enjoy the love between parents and children. To this end, she adopted two enormous pigs, Foola and Woola, whom she treats as her own children, though ironically it is implied that she does not demonstrate the same affection towards her Nephilim offspring. A third pig-child, Boola, appears later on to aid Ezekiel in her war against Ishtar and the Freemen. She is the second and final Grigori that Enoch purifies and imprisons. The eye color on her helmet is purple.

Baraqel - A former angel who was responsible for the construction of the Tower. One of the Freemen's Notes posits a possibility that the Nephilim inside the Tower were devouring each other deliberately out of spite, to create a Fire Nephilim that would destroy the world Baraqel had made. Lucifel reveals that Baraqel had been eaten alive by a Fire Nephilim. However, although Baraqel isn't battled directly, the Fire Nephilim had gained Baraqel's power after eating him, making it the Baraqel Nephilim. This unholy creature nearly devours Enoch. Luckily, after Enoch is rescued by Methuselah, the Baraqel Nephilim is obliterated by a mysterious power, implied by the archangels to have been the "power of God".

Armaros - A former angel, described as being an "artist" and pure-hearted. He claims to have been a friend to Enoch, and to whom Enoch told of his experiences on Earth. Unfortunately, this played a role in Armaros's decision to leave Heaven, out of a love for the depiction of humans Enoch painted for him. As a result of his betrayal, he can only communicate with eerie shrieks having lost his voice after his fall from heaven. His offspring is the only one of the Nephilim that is at peace with itself, and thus does not devolve into a Fire Nephilim. Armaros himself is the only one of the Grigori to show remorse for his betrayal, and attempts to help Enoch in his quest, though he is ultimately consumed by the Darkness while trying to save Enoch's life. The eye color on his helmet is blue.

Arakiel - A former angel who joined in Semyaza's defection. His motivation for becoming a fallen angel is unknown. When Enoch gets to his floor, Arakiel is revealed to have died, and thus he is one of two angels not to be fought by Enoch. 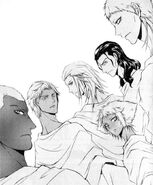 The Grigori in the manga - minus Armaros
Community content is available under CC-BY-SA unless otherwise noted.
Advertisement